Writings in Kannada on Philosophy, History and Economics

Past, Present and Future of Land Reforms

The first discussion on the second day was on the Past, Present and Future of Land Reforms in Karnataka. Prof. Chandra Poojary, Professor of Development Studies, Kannada University, Hampi, said that the land reforms movement indeed created a revolution by empowering the most backward sections of the society, and enabled the children of those families to gain education and liberation, himself being a beneficiary. He said that more than a lakh such families were benefited in Dakshina Kannada district alone. Prof. Chandra Poojary said that in the initial years, the communists as well as the Congress party gained immensely from the land reforms, with their leaders winning elections after elections; however, since the early 1990s, that has changed, and with the new generation growing up, the forces of communalism have made significant gains, almost completely wiping off the left, and sidelining the Congress. Sri Dinesh Mattu, senior journalist, stated that although his family too was a beneficiary of land reforms, the lands so got being small holdings, did not help the beneficiaries to a great extent but for empowering them as land owners, and many of them had to involve in other economically viable activities to sustain their lands and families. Sri Mattu felt that implementation of land reforms by late Devaraj Urs, the then CM of Karnataka was a ‘revolution in a hurry’ and also his choice of second line leaders for his party was also done in hurry, and both these contributed to the failure of the Congress party to fully encash on its land reforms programme. Com. PV Lokesh in his presidential remarks clarified on the valiant role played by the CPI and its cadres in forcing the congress government in Karnataka to implement the land reforms, and explained that the reasons for a more successful implementation in Karnataka compared to northern states was solely due to the active participation of the left cadres. Even In Karnataka, the tenants could get their lands wherever the cadres of the left helped them in the process, and elsewhere, the land lords and their strong arm tactics succeeded in dispossessing the tenants of their holdings. Com. Lokesh also drew attention to the fact that of the unclaimed or unconfirmed lands of the tenants that was taken over by the government, only about 38% have been distributed to the landless poor and the remaining are left uncultivated. Some of these have been occupied by the landless for unauthorized cultivation, as Bagar Hukum, and the regularization of such lands for the landless poor is a major issue that needs to be tackled urgently, said Com. PV Lokesh. 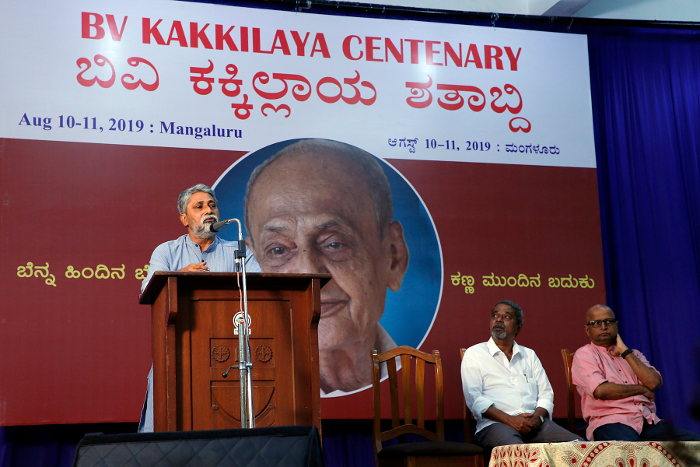 Dr. Chandra Poojary speaking on ‘Land Reforms in Karnataka: Past, Present and Future’ 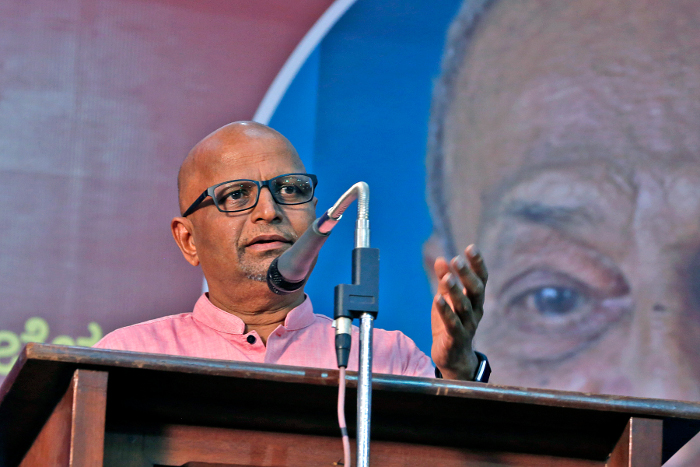 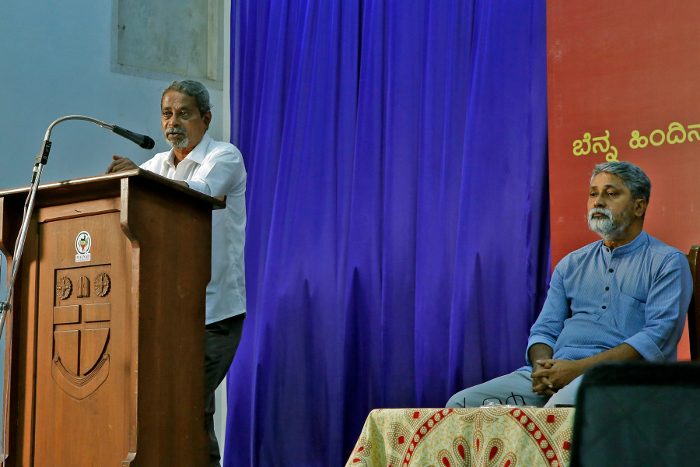 Com. PV Lokesh speaking as chairperson on ‘Land Reforms in Karnataka: Past, Present and Future’