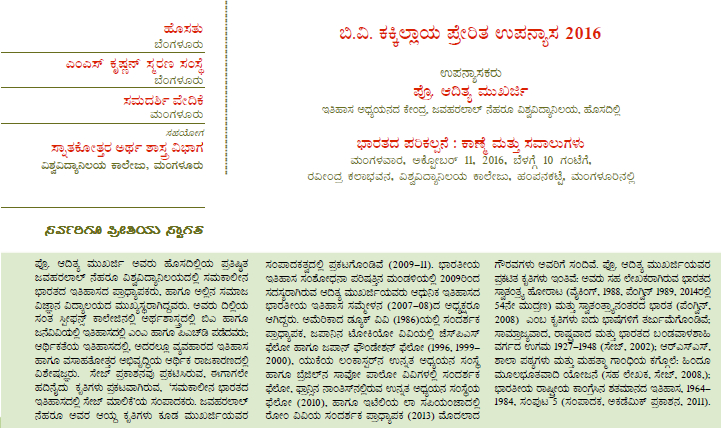 BV Kakkilaya Oration 2016: The Idea of India – The Vision and The Challenges 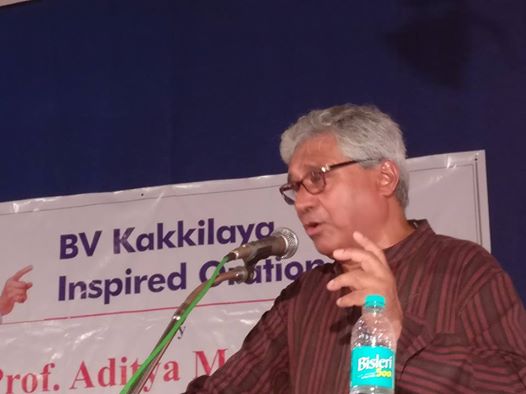 I am from JNU, and do I look like a teacher of terrorists? We have had enough of these baseless accusations over the past 6 months.

India’s struggle for freedom was no less than any revolution, but sadly we don’t call it as Indian revolution.

It was a long drawn struggle of more than a century and was the biggest mass movement for freedom, anywhere, anytime in the history of mankind. Unlike the revolutions in Europe and Latin America, our revolution did not involve a handful of leaders taking to arms and overthrowing govts, but involved the mass of Indians, the poor, the workers, the peasants and all, participating in the freedom movement. The armed revolutions that happened elsewhere resulted in monolithic nations of one language, one religion, one ideology etc., that in turn led to internal strife and even civil wars in which millions died and such nations aspired for domination on others. Our freedom struggle included the masses, of every language, every region, every religion, and all of them together fought for liberation. The greatest poets of Kannada, Tamil, Telugu, Bengali and Assamese and all else were the greatest nationalists as well. The best of intellectuals were the greatest leaders of the masses, and it was the school teachers who encouraged their students to join the freedom struggle.

Three ideas defined our freedom struggle and defined our nation and every freedom fighter, Congress to the left, agreed on these:
1. Freedom from colonialism
2. Democracy, inclusiveness and secularism
3. Pro poor policies

Before the British, India was a multi religious, multi linguistic, multi cultural society. Islam came here during the life time of the Prophet, and Christianity came soon after the foundation of that religion, and both entered India through the neighbouring Kerala. And at that time, Hindu religion, as it is being defined today, did not exist. What existed was the different customs and traditions of our people, some would worship the neem, some the peepal, some the snake and some the cow, and some others the stones and some others the idols. All of them co-existed, and these symbols were not matters of quarrels. Argument or Tarka or honouring the diversity of opinions has been at the heart of our discourse for five thousand years of our existence. Therefore, the idea of India had to be inclusive of all these customs and traditions and diversities, and we have indeed proved to the world that we can fight for freedom as one nation and live as one nation.

The idea of democracy is also not borrowed from Europe, as some argue. Tilak, in late 19th century, wrote about adult franchise when the idea did not exist anywhere. We brought it into practice soon after in the form of provincial assemblies under the British and when the USA and UK were grappling with slavery and equality in the sixties, we had already established our democratic governance. And that was possible only with inclusiveness and secularism.

The vision of our leaders was exemplary. Gandhiji stayed in Noakhali when the Hindus were massacred and the entire cabinet of Nehru’s interim govt camped in Bihar when there were revenge killings. During the early days of independence, Nehru spent more time in Punjab than in Delhi, trying to calm down the situation that arose after the partition. Today we have ministers abetting riots and lynching.

On this background, the murder of Gandhiji was an attempt to bring about a coup, to subvert the three ideas that made India – of freedom, democracy and poverty alleviation. But it failed. The only election ever to have been fought on the issue of secularism was the first election of free India – and the referendum of the people of India was strongly in favour of secularism, the communal parties together polled less than 6% and got less than 10 seats in the parliament.

Nehru’s govt had much bigger task at hand. Today, some so called commentators claim that the first 40 years of India were wasted. Far from it. When we became independent, we had no food, no machines, no technology, nothing, and had to grapple with the venom that was spread by the communal forces. Nehru’s govt managed all these. We imported food and medicines, and everything else essential. If everything from a needle had to be imported in 1947, by 60s, more than 45% was indigenous and by 70s, almost 90% was indigenously produced. The first five year plan established the best institutions of science and technology, the Sahitya Academy and the Lalit Kala Academy and all else and the second one laid the foundation for the best of industries. The economic policies of 1991 could not have come without the achievements of 1947 to 1990. And most importantly, we did all these as a free, democratic nation, a very unique achievement for any country in the world. British industrial revolution happened with men, money and materials brought in from the colonies; American development happened with slave labour. Japan developed by being semi sovereign to the American govt and the Korean development happened by semi authoritarianism and the Russian and Chinese happened by forced collectivism. But we developed our nation as a free democracy, by allowing trade unions, by allowing freedom of speech, by allowing free media. This did not happen anywhere in the world. And we have remained free and sovereign, we led the 100 nations against US hegemony as leader of the non aligned movement, we refused to sign the non proliferation treaty when even countries like Canada had to sign it and we have not succumbed to colonial powers as the African nations had to.

Communal fascist movement is already targeting intelligentsia; street power and state power are working together to lynch the opposition. Attempts are underway to pull people back from secular, free, rational sphere to obscurantism, communalism and narrow mindedness. We do not yet have a school of thought of our own, we are yet to decolonize ourselves fully. In the last 2 decades, we have been witnessing the obscenity of inequality, we are losing on the ideals of pro poor India; 40% don’t have enough to eat and 30% don’t go to school, more so among the Dalits. Therefore, the poor are now demanding food, and education. Abdication of responsibility by the intellectuals is a major challenge; they are doing the opposite of what happened during the independence struggle, when the best brains led from the front. Gandhiji gave a call to everyone to turn their faces to the poor, time has come to call upon the intellectuals to turn their faces towards the country. 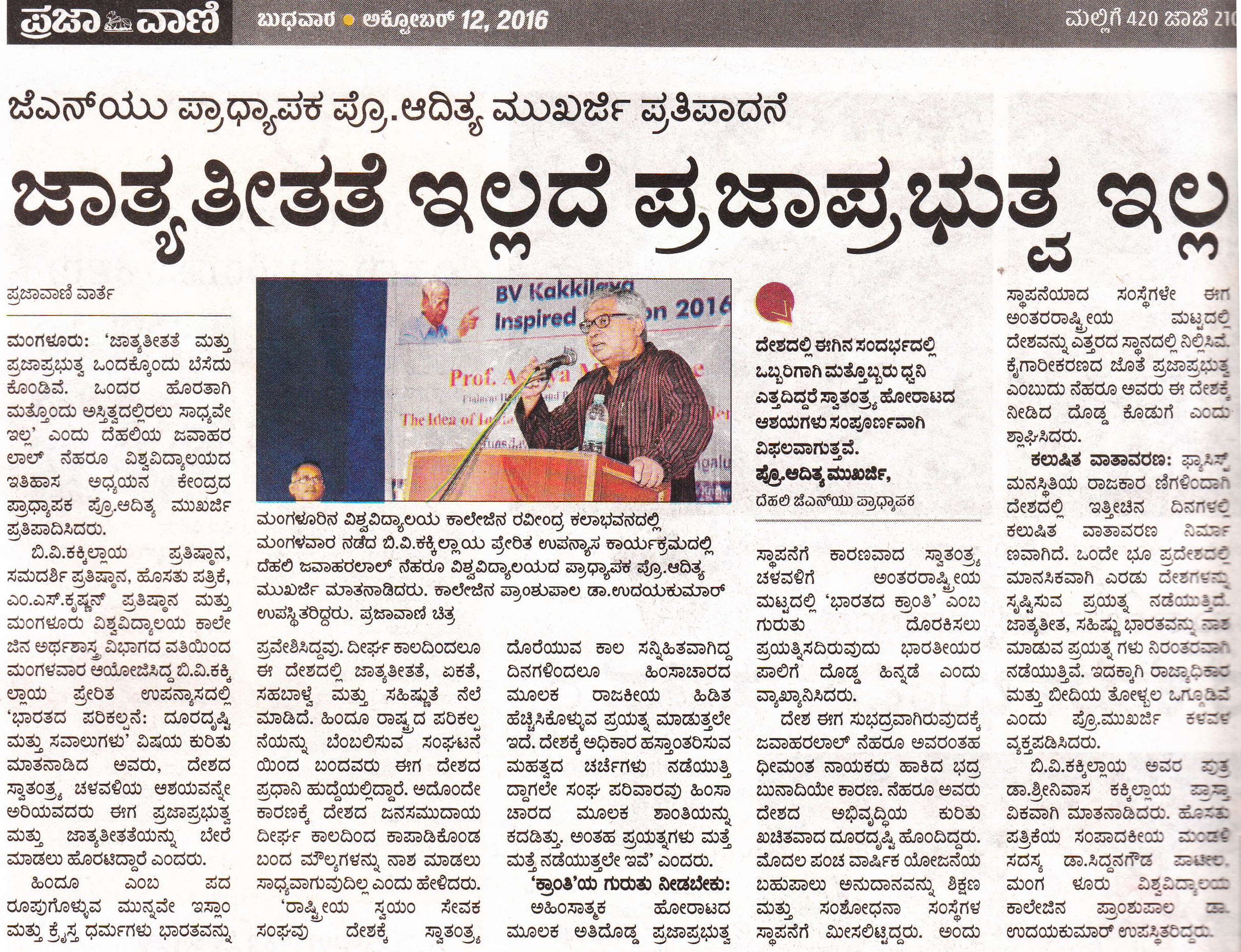 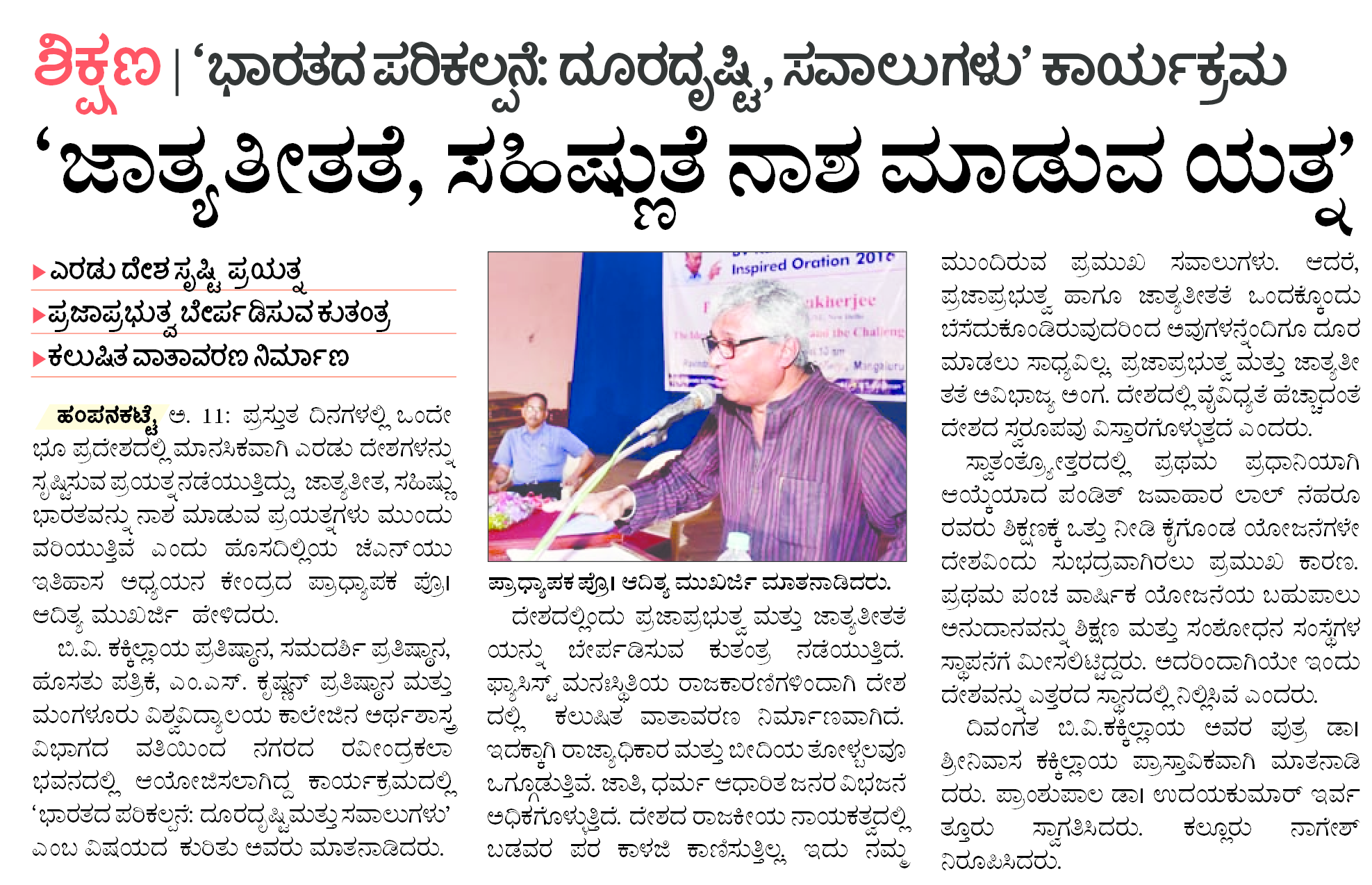 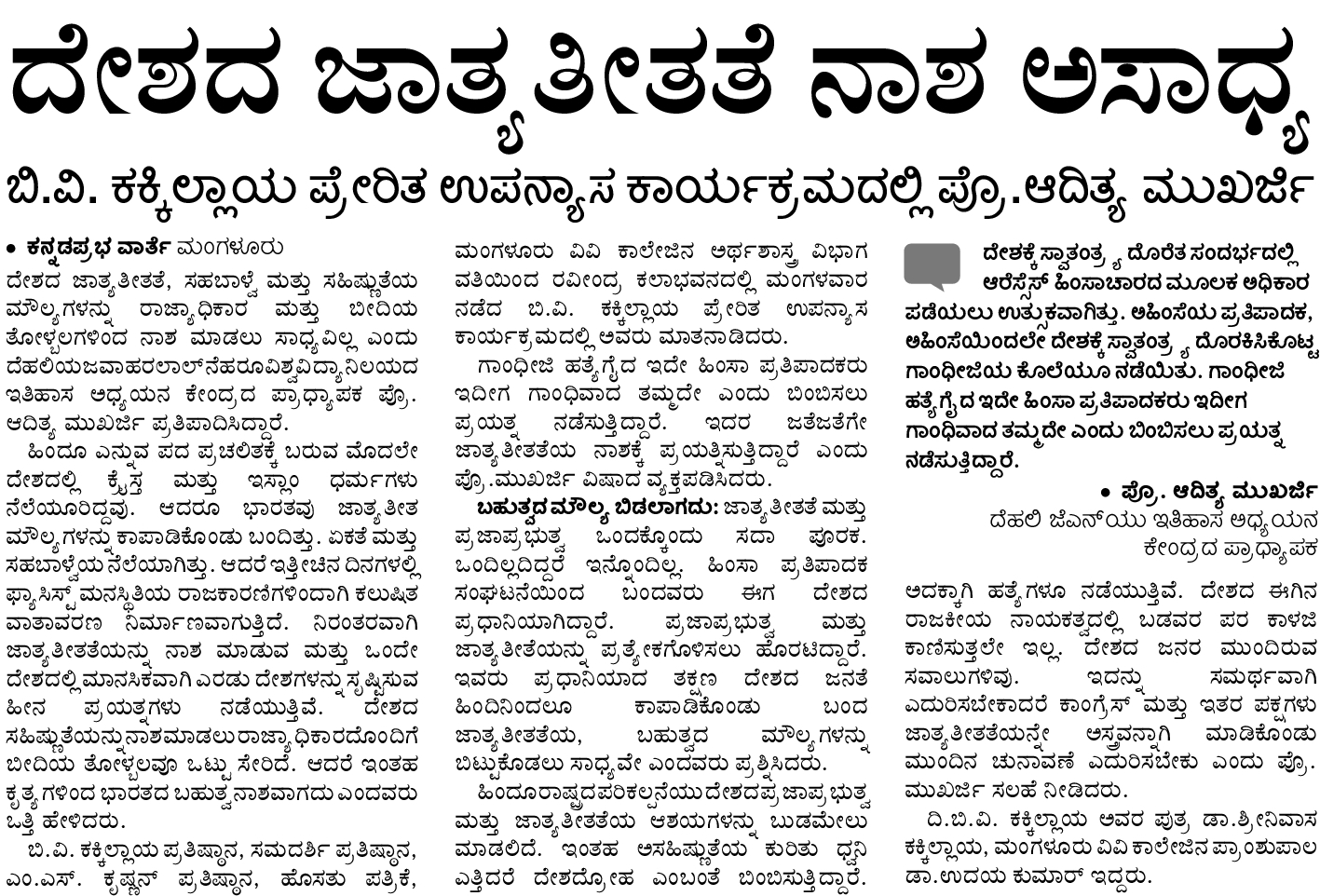 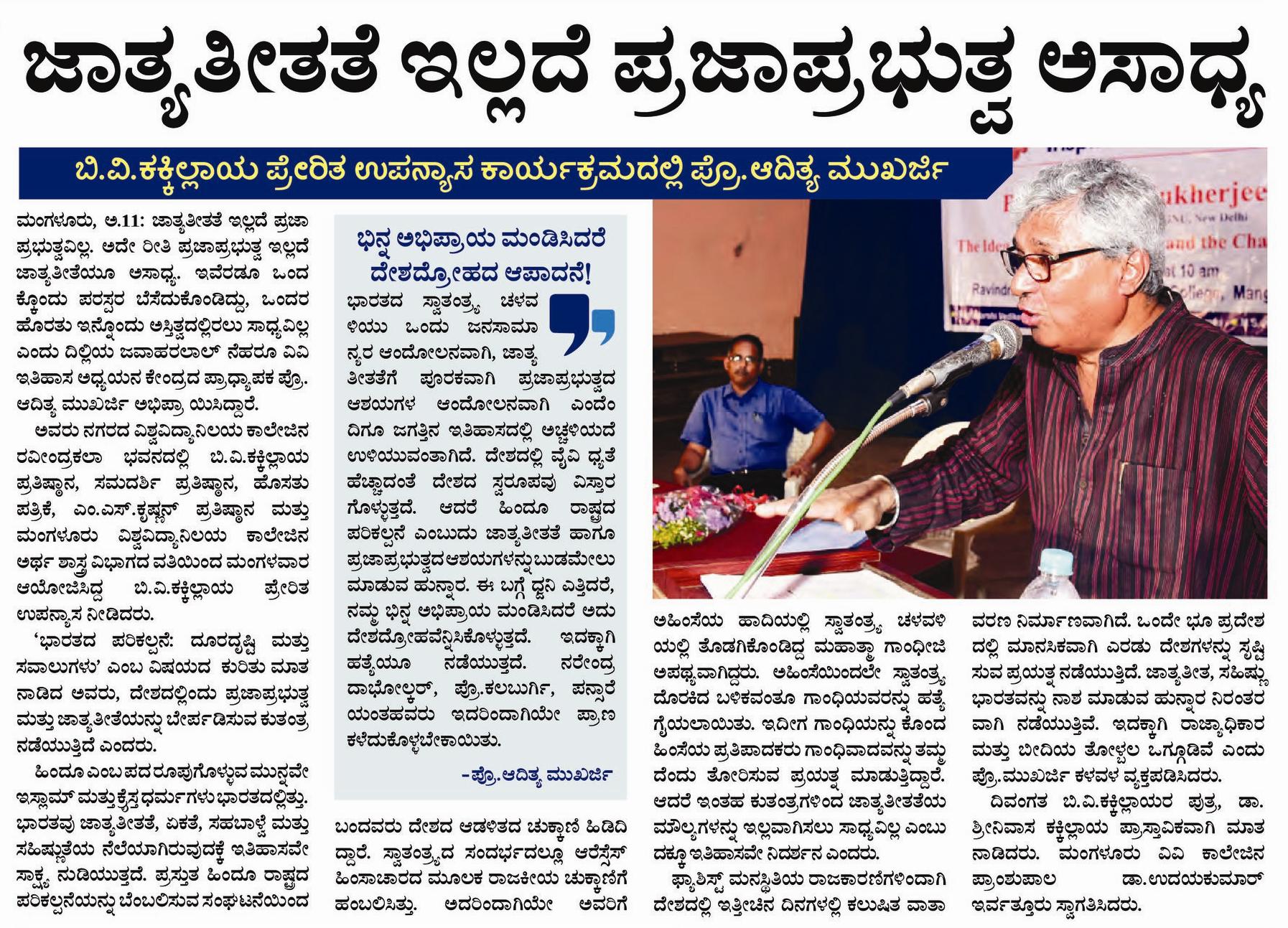